Ep. 2: What the Infrastructure Bill Means for the Aggregate Industry 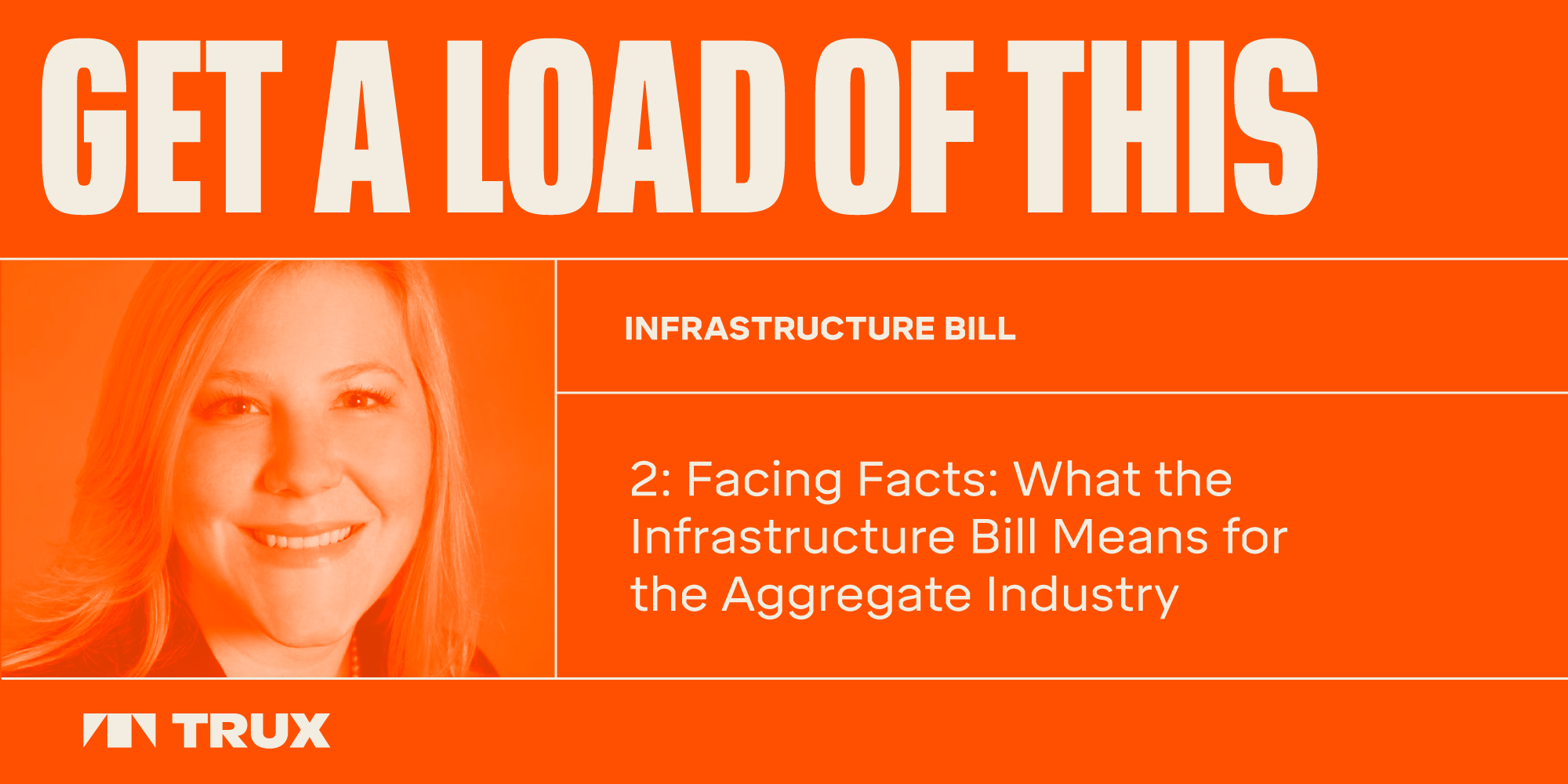 Michele Stanley is a leader when it comes to advocating for the interests of the aggregate industry.

Facing Facts: What the infrastructure bill means for the aggregate industry

Michele Stanley, Vice President of Government and Regulatory Affairs with the National Stone, Sand, and Gravel Association (NSSGA), has 17 years of experience and is a leader when it comes to advocating for the interests of the aggregate industry.

In today's episode, we discuss the upcoming infrastructure bill and the ultimate impact it will have on the construction industry. From what is happening in Washington today, to how the industry will be able to plan for the years ahead - we break down the top concerns and impacts of the infrastructure bill.

Tune in to find out Michele’s expert take on what is happening in Washington, or read more about it below (Please note: This interview took place in July 2021. The transcript below has been edited for clarity and length).

Can you tell us a little bit about who you are and what you do in the industry?

Michelle: I'm the Vice President of Government and Regulatory Affairs for NSSGA (National Stone, Sand & Gravel Association). I’ve been with the association for six years, and I work on policy, mainly transportation, but also some of our natural resource issues as well. Additionally, I also do work regarding labor, and OSHA issues as they relate to Capitol Hill. I started out as a lobbyist, building relationships with staff members and members of Congress. Now, I oversee our legislative and regulatory team. With my experience I have an overview of all of the issues.

What are the biggest hopes that you have for what will come out of an infrastructure bill?

Michelle: My number one hope is that it actually is a hard infrastructure bill. That it is separate from some of the human, or soft infrastructure that the administration has been talking about. The original package that was put out there by President Biden included all of the above. We have been pleasantly surprised to see that they have now pulled out some of the more traditional infrastructure pieces, and our hope is that it stays that way as they continue to move forward.

How is this infrastructure bill different from other ones in the past?

Michelle: In the past, each kind of segment of the industry had their own separate bills. There would be a surface bill, a water infrastructure bill, an airport bill, and a pipeline bill. This is the first time that we're seeing them talk about it as one big package and not separate things moving in at different times, in different directions.

What do you think the implications of having just one infrastructure bill will be for the industry, and in particular, the aggregates industry?

Will it make an impact for people that are doing this work day to day?

Michelle: Down the road, it will be impactful. The bill isn’t going to be one of those things that turns on with a switch and there are a bunch of jobs at once. The money will slowly be dispersed, put out the door by states and localities. I think it's going to be more of a gradual change. From what we're hearing from members, the workforce issue seems to be at the top of their mind. We're really hoping that the trickle out of money helps the industry prepare, workforce-wise for those lettings, and for that money going out.

Aside from labor, what are some of the other top concerns that you've been hearing about the bill?

I think that it is going to make it difficult for them to come up with ways to pay for it. I think they're going to pull some money from this government program that's not spending it, and put it over in this pot of money. We think this is unfortunate because the program has historically been a user fee, or user fee funded program. Once we start going away from that, and injecting general fund money, or if it’s paid for by regular, yearly appropriations, that would be really detrimental to the states and how they let their projects year to year.

How do you see this funding model as being detrimental?

What are the potential implications of that?

Michelle: It doesn't give states the ability to plan. When you do this in a five-year bill, [states] are able to know how much money they're going to have each year. It's almost guaranteed upfront that they'll have at least X amount of money coming through the formulas, and through the program.

If they wait, and they do it through discretionary spending, which is what they call it on Capitol Hill, through the yearly appropriations process, you wouldn't know until September 30 of the year before as to how much money you're going to be getting. The uncertainty that that gives states is hard. The states really have no certainty as to how much money they're going to get. States end up planning more on the conservative side. Are they just going to fill potholes instead of building new roads from the ground up?

So if states aren’t able to plan projects and workforce allocation, they may not be able to benefit from the bill as much …

Michelle: Exactly. You wouldn't be able to effectively spend that money.

It's very easy to see the impacts from a macro level, but when you come down to the micro level, what sort of impacts might we see?

Michelle: When we talk about it on Capitol Hill it's the trickle down effect. It's not just the jobs at an aggregate facility, or those that are on the road actually laying down the pavements. It's also the restaurants where all those folks are eating. It's the gas stations where they get gas. It all trickles down and expands throughout the community. The more of a framework that can be put together ahead of time, gives all of the people in these communities a way to capitalize on it.

Can you break down some of the key groups you've been working with on Capitol Hill so we have a better understanding of who's really working toward this ultimate finalized bill?

There are also the problem solvers -- they’re a moderate group that has formed in the House. It's being led right now by Brian Fitzpatrick from Pennsylvania, who is a Republican, and Josh Gottheimer, who's from New Jersey, and is the Democrat. I think it's a phenomenal caucus. You can only come on if you bring someone from the other party with you. They're a group of 58 house members. With the margins in the house being so close, I think the democrats only have a five seat majority right now, if they vote for, or against a bill, they can take it down on the house floor.

They had gone up as a group and had also met with the President. There was a final group that they were calling the G-21. I think it started out as the G-five or the G-10, and now it's 21. It's the group of bipartisan senators who have now signed off on the bipartisan infrastructure framework.

The problem solvers are now backing that framework as well. The moderate middle of the road senators and house members are getting behind this framework to try to push it across the finish line.

How can construction companies prepare for this upcoming infrastructure bill?

Are there things they can be doing now to kind of get in the right mindset or start thinking about planning for different outcomes?

Michelle: It's going to be hard to plan at this stage. It still feels fairly early. I know that it's been talked about since the beginning of the year, but things have only really just ramped up in the last couple of weeks. I was chatting with somebody earlier today, trying to explain that things on the Hill don't happen at lightning speed. That's for a reason, right? You don't want a bad policy bill to be easily made law. So there's a reason that things take a little bit of time. This isn't going to happen at the snap of a finger.

There is quite a bit of process that needs to happen before it becomes a policy package in order for it to come to the floor. Once things start to come together and are more concrete, we probably can circle back and see what the best step is.

Getting involved with advocacy and getting engaged in, whether it's your business, your local communities, your national association, whatever it is that you're involved with, having that advocacy and engagement with your members of Congress is really important. Letting them know how this will positively affect your home life, your job, and your future. All of those things are really important for them to hear because it's one thing for me to go to the Hill and talk about the industry. It's another, for those of you that are on the ground, doing it day in and day out for you to tell your story.

Members of Congress actually really love hearing personal stories, and it really does move the needle. Whether it's you making a phone call or sending an email on your own, or doing grassroots work, don't take those advocacy touches lightly. They really do make a difference in the end.

Is there a way for people who are interested to get in touch with NSSGA?

Michelle: You can visit our new website, it’s www.nssga.org, and there is a tab at the top that says “Get Involved.” You have options-- whether you want to get involved with our committees, or if you want to know what our most recent grassroots email campaign is -- that can all be found there.

We have a few rapid fire questions … has there been someone in the industry that's acted as a mentor to you?

Michelle: Janet Kavinoky with Vulcan. I've known her for a long time, back to when she was in Washington DC. She's really helped me professionally, guiding me through the construction industry and to where I am now.

What keeps you in the construction industry?

Michelle: I love the people. I love the members. All of you guys out there. It's really great to have such an enthusiastic and engaged membership. I love that what we do is tangible. You can see roads being paved, you can see rock being crushed. I really enjoy seeing that physical aspect.

What's the one piece of technology that you can't live without?

If you could automate one part of your job, what would it be?

Michelle: Replying to emails. A vacation responder, at all times, with thoughtful content.

John Carney, a foreman with Harness LLC, and his team are focused on top-quality work and...

Ep. 4: Friend or Foe?: Technology in the Dispatch Office

Raquel Rivas, a dispatching supervisor with Vulcan Materials Company, sits down with us this week...

Seairra Williams, the CFO of UFFB & UFT, has built a long career working with haulers - helping...